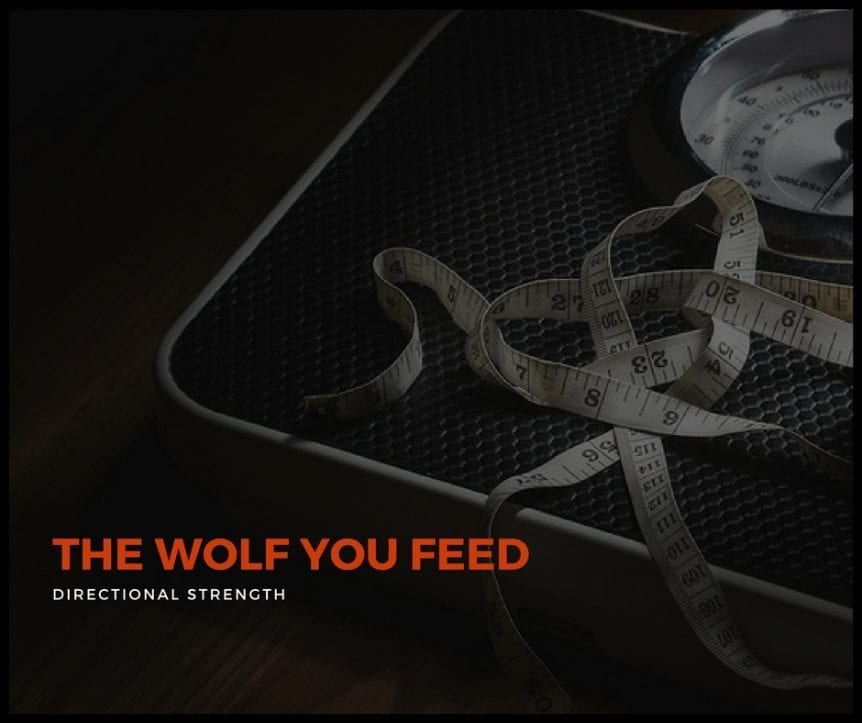 “An old Cherokee is teaching his grandson about life. “A fight is going on inside me,” he said to the boy.

“It is a terrible fight and it is between two wolves. One is evil – he is anger, envy, sorrow, regret, greed, arrogance, self-pity, guilt, resentment, inferiority, lies, false pride, superiority, and ego.”

He continued, “The other is good – he is joy, peace, love, hope, serenity, humility, kindness, benevolence, empathy, generosity, truth, compassion, and faith. The same fight is going on inside you – and inside every other person, too.”

The grandson thought about it for a minute and then asked his grandfather, “Which wolf will win?”

The old Cherokee simply replied, “The one you feed.”

It’s been well over a year since I last stepped on a scale, and this decision to refuse to weigh myself has been an intelligent, eye-opening and positive one indeed.

We like to think that we’re logical creatures, but in reality, we are anything but.

Each and every one of our rational thoughts are peppered with and infiltrated by emotions, bias and belief systems and the scale for me, is the best example of a pervasive emotional prejudice which no amount of rationale will ever overcome.

When I started dieting about fifteen years ago, like many other people, the scale was perceived as the measure of success or failure and yet, the scales are fickle;

At the age of eighteen, I didn’t exercise at all. I smoked and drank to excess and I worked at McDonald’s doing night shift. I didn’t sleep well, I ate fuck all vegetables and my two meals a day were cheeseburgers or Mi Goreng noodles. I weighed about 54 kilograms.

When I was nineteen my weight went up to 65 kilograms. I still smoked and drank to excess and I didn’t exercise. I stayed this weight until after a couple of months of living in London, I saw a photo of myself which made me reconsider my lifestyle. I adjusted my diet (I even went vegetarian for about a year) and started exercising in the bedroom of our sharehouse. With no equipment and no formal dieting advice, just using the internet to find information – I dropped about 5kg and sat at 60kg for a number of years.

Once I began seeing changes I got a bit hooked. I saw a coach to do a 12-week challenge and this was the beginning of my deprivation dieting, orthorexia and exercise bulimia habits. Over 12 weeks of starvation dieting and overexercising (up to 3 hours per day), I dropped to 57kg but put back on 6kg within 2 weeks after finishing the challenge.

My weight stayed here for some time while I fought with my eating and exercise issues. I felt absolutely trapped in this terrible way of life – binging, purging, overtraining, undertraining, drinking too much and eating too little and then getting ravenously hungry, eating too much and then restricting again from the shame of being unable to “control myself,” and the cycle would repeat on and on. Researching physiology and metabolism I realised that the scale wasn’t the best indicator of success for someone trying to optimise their body composition and stay lean and muscular.

Since overcoming my issues, I’ve added more weight, but not more body fat. I sit at the same bodyfat and clothing size that I had when I was 60kg but I’m significantly more muscular than I was back then. The last time I weighed myself, over a year ago – I was around 66kg. To say that I am healthier today, eating and moving far more and far better than I ever did when I weighed just 54 kilograms is a statement anyone could agree with.

Logically – I know that that I’m going to be heavier than what I was all those years ago when I didn’t train. I have spent the last 3-4 years consistently pushing myself harder in the gym, getting better at training and becoming more interested in strength as a pursuit. It’s easy for me to put on muscle and genetically I’m built to be bigger – so it reflects in my body shape today.

Logically I know that a scale is just a number, it’s quantitative and not qualitative.

But yet – it’s not logical reasoning that is the problem here.

It’s the psychological link which I have created, fed and built over all of those years where even now – as a 32 year old woman with significant knowledge of the human body, metabolism, nutrition and musculoskeletal functions – I cannot look at that quantitative data and cease to derive some qualitative data from it.

How much I am driven by insecurity to stop training for strength and for self-fulfilment and self-development and instead, to start training for fat loss.

How much I am driven by insecurity to stop eating what my body needs to recover, and instead, start dieting to get smaller because I’m “not good enough” if I weigh too much.

I would feel compelled not only to start dieting to become smaller and leaner but in dieting, in a restrictive manner, I then become driven to binge and purge.

Getting on the scale for me is the fastest way to revisit my past issues. It’s about inviting the wolf back in, and allowing it to chip away at the strength and resilience I have built today.

So I don’t go there.

It’s a pure avoidance strategy, but yet it’s worked wonderfully for me.

It’s allowed me to focus on the quality of my physical being.

It’s allowed me to be able to concentrate on my values and my purpose, and it’s helped me to cast aside the negative emotional baggage I had carried for so long, and instead to enjoy the abundance of strength and self confidence that I have built by being specific with how I want my body to move.

Many of my clients and the women (and men, to a lesser extent) become as obsessed with this number and the emotional implications as I did. They ask me fervently to weigh and measure them to see if they have progressed, but when they don’t see what they have expected they either become despondent with the processes of eating and training, or they become even more obsessed with the process of weight loss.

In my experience and in the experience of many people, feeding this dysfunctional relationship with the scale on makes the matters worse.

Because when you feed a negative emotional connotation with a quantitative measure, all of your success in the gym – the PBs, the improvements in technique, the loss of physical pain or the development of confidence goes by the wayside.

All of the work you’ve been doing improving your relationship with food and healthy eating by being more conscious of the quality of nutrition you are getting, feeding your body according to its needs and be more cognizant of your ability to sustain your energy and vigour day to day no longer matters.

Now you’re dieting and training because the scale tells you that you’re not good enough, not because you are. By inviting this insecurity in you also invite in cravings for junk food (because even though you didn’t even want it or give it any energy before, now that you’re “not allowed” to have it, it’s more appealing than ever), you push yourself to train just to burn calories, even on days that you’re sick and need to rest (because if you take just one day off the gym, you’re doomed to stay fat).

You’ll start avoiding social outings with friends and family because you know you won’t be able to control yourself around all that food and booze anymore (which is a self-fulfilling prophecy) and now your only thoughts day in and day out are calories, how fat you are, how much you don’t like your belly/thighs/butt/arms and how much happier you’d be if your belly/thighs/butt/arms were perfect.

They say that men think about sex hundreds of times per day.

I bet that a woman who has stepped on the scale and seen a number higher than the one she wanted, thinks about how unattractive, hopeless and fat she is at least three times more.

Knowing how much you weigh changes absolutely nothing about you.

As long as you don’t let it.

So if you cannot get on a scale without being emotionally affected by what it says to the extent that you question your self-worth, contemplate restrictive dieting and start a brand new, over the top and punishing fitness regime, counting calories obsessively and becoming riddled with obsession, insecurity and negativity about your ENTIRE SELF, then DON’T.

Refusing to do something which caused me to undervalue and hurt myself, to belittle myself and to perpetuate unhappiness was the best decision I have ever made.

I encourage you to do the same so that it can cease to rob you of the energy you need to appreciate the more important things in life.