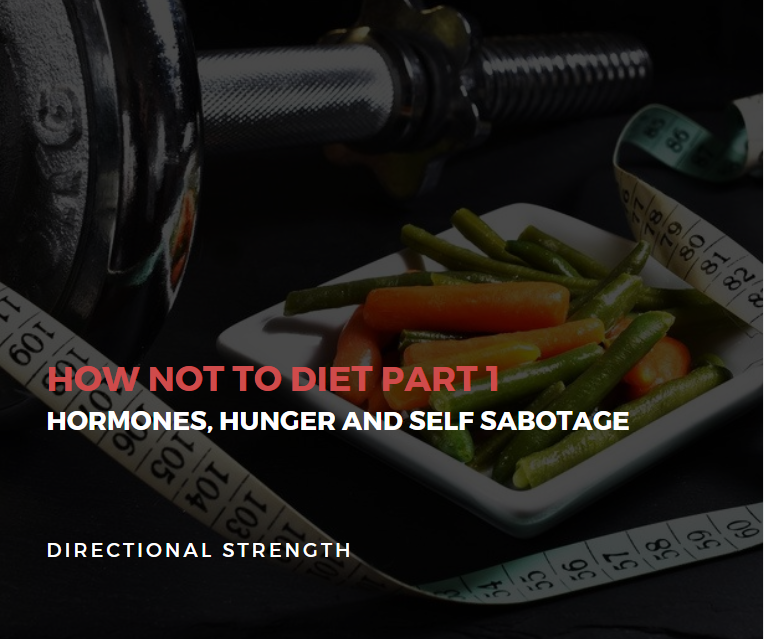 When it comes to diet and exercise, and pretty much anything else in life, I figure:

If you do stupid shit, you will get a stupid result.

The problem is that the fitness industry feeds off stupid shit, and the average person doesn’t know the difference between what is stupid shit and what isn’t.

This blog aims to help you decipher if the “1200/1500 calorie rule” is really a good idea for you, and why in 90% of cases it will fall under that category of doing stupid shit.

Hormones, adaptations and why you’re depressed, grumpy and devouring everything in sight

There’s a buttload of hormones and processes in your body, but let’s focus on the ones that will have the biggest impact upon your success or otherwise when following a diet;

Insulin
Insulin gets a ridiculously bad rap. It’s not a “fat storage” hormone as it’s touted to be, but is an indicator of a fed or unfed state. Insulin allows us to move energy into cells when it is released by the liver following a meal, it helps to begin the process of taking amino, fatty acids and sugars from the blood into the mitochondria of our muscles.
Although fat burning is blunted when we release insulin, having regular spikes of it is not going to affect your ability to get leaner provided your are in an energy deficit. This false concept is largely one of the reasons why people assume that you have to diet on low or no carbs to lose weight.
For a ridiculously good article on the role of insulin, how it works and it’s undue demonisation, check this out.

Glucagon
Glucagon performs the opposite effect to insulin, and when our blood sugar is low it signals to the body that energy is needed. It allows us to move stored carbohydrates (glycogen) from the muscles and releases it into the bloodstream as available energy. Glucagon is increased when we are in a deficit and reduced when we are in energy balance.

Ghrelin
AKA the hunger hormone. Released from the stomach, it communicates to the brain when we are hungry.

Ghrelin is usually released prior to our usual meal times (this is how your cat knows exactly when it’s time to bitch for food despite being unaware of clocks) and there is also a psychological component to ghrelin that comes into play when we are dieting. In a study involving two different kinds of milkshakes, one which was a “diet” shake and the other “indulgent,” the indulgent shake created the largest drop in ghrelin, as you would expect.
But what you wouldn’t expect, is that the shakes had the exact same calorie content, just a different label. This means that just thinking that we are dieting can stimulate hunger, irrespective of our actual calorie intake, and this is an important factor to remember when we set up our diets.

Leptin
AKA the satiety hormone. Leptin is released from fat cells and indicates that bodyfat isn’t just some kind of flabby, “disgusting,” inert part of our bodies but actually has a hormonal role to play on it’s own. Leptin helps us to regulate our bodyweight by promoting fullness, and will drop in response to a caloric deficit and a drop in bodyfat.
Women have around twice as much leptin as men do (we are generally fatter so that makes sense!). Similar to insulin, leptin resistance can develop when we overeat and become overfat and it will not have as much effect upon appetite regulation. Leptin does not seem to increase when we eat proteins or fats, but carbohydrates can increase acute leptin levels.

Leptin levels will drop by up to 50% within as little as three to four days when underfeeding, and will continue to drop as bodyfat is lost. This can explain a lot about why we get so hungry on a crash diet and as we get leaner (particularly for women).

Check out this article by Lyle McDonald if you’re keen to read more about the role of leptin in weight management.

AMPK
This enzyme helps to balance energy consumption and energy expenditure by sensing the production (or lack of) ATP. ATP is the end product of food and energy breakdown and is what your cells recognise as energy.
During low energy availability periods, fasting and intense exercise – AMPK is ramped up and help the fat burning process occur. It thus has a role in weight loss but also in things like insulin sensitivity and the reduction of inflammation – which occurs during any diet. It can also help prolong longevity as when we are breaking down energy, we are also dismantling and breaking down “old” cells and turning over new ones.
AMPK can do some really positive stuff for our bodies and indicates the benefits of not overeating and regularly going into a calorie deficit, but also indicates that when allowed to run rampant and inhibits protein synthesis – so chronically high levels of AMPK invokes the loss of body fat, but also muscle, glycogen and our performance in the gym. This can makes sense as to why some people diet so hard they lose weight on the scale, but get weaker and less energetic also – and thus do not change their body composition.

Cortisol
Released in response to various levels of stress (psychological, physical or physiological), cortisol helps us to break down stored energy for release into the bloodstream. Acutely, cortisol can aid in fat burning and the reduction of inflammation, and is released after exercise, but chronically – it can cause leptin resistance (hello, cravings!), cause the loss of muscle and affect our immune function. It can also bind to the receptor of another hormone called aldosterone, which causes us to hold water. (Which often, for a chronic and highly stressed dieter, leads them to believe they haven’t lost any body fat and then start to diet HARDER. The exact opposite of what they need to do!)

Chronically high levels of cortisol can also have a role in impairing metabolic rate, thyroid production, reproduction and fertility, recovery, sleep quality and duration and a whole host of other shitty effects that can put a dampener on your results.
I wrote another blog about stress, sleep and it’s effects upon metabolism, which you can read here.

T3/T4
Your thyroid will play a role in energy production and affect things like body heat and energy expenditure. An increase in thyroid hormones will increase the amount of energy “wasted” by the body in the process of creating energy, helps regulate basal metabolism and helps fat burning occur within the mitochdondria.
T3 is the active form of T4, and plays a role in nearly all our physiological and metabolic actions. Chronic dieting and stress will reduce our levels of active T3 and turn it into reverse T3 – resulting in less energy expenditure and less production of the hormones such as testosterone, progresterone and estrogen.
Regular diet breaks are essential to helping you keep your metabolic rate higher, and to prevent a loss of physiological functions such as fertility, sex drive and the regulation of body temperature.

Alrighty, so if you’re still with me – the above info basically says that some dieting is good for your body. It is not advisable to be constantly overeating, and if used correctly, a calorie deficit can be a healthy and productive way to keep yourself young, lean and fit.

But like everything there is a happy medium where if we push too hard, we go the other way.

A chronic deficit or a deficit taken too far, reduces the amount of energy available to the body to perform basic functions and will lead to reductions in

– metabolic rate
– protein synthesis and recovery capacity from training
– thryoid hormones and reproduction
– body temperature
– digestive function and the production of bile, saliva and other factors in the breakdown of food within the digestive system
– strength, endurance and performance
– anabolic hormones and the production and retention of muscle, skin and bone
– energy expenditure from movement, both intentional and unintentional aka NEAT
– mood and psychological wellness, and
– ability to say no to foods or to recognise when we are full.

So how do you know if your diet has been “taken too far” in the first place?

A diet of any kind will create something called a “low energy availablility” status. All of the above hormones are triggered and fat loss will occur, but depending upon the severity of the diet, the effects and hormonal response will be more or less severe also.

A moderate but not extreme diet will allow for fat burning to occur whilst mitigating or reducing (but not preventing) these hormonal responses.
This would be a dietary intake of between 30-45 calories per kg of fat free mass.

An extreme diet will increase both fat burning and the maladaptations we have discussed and would be a dietary intake of below 30 calories per kg of fat free mass. So using the same example, this would be anything below 1560, and this is AFTER taking energy expenditure via exercise into account!

If you were to choose this approach, and you can, but you must understand that this is not something you want to do for a long period of time! You should also contact your doctor and have your health checked prior to undertaking this kind of approach.

It should also be noted that those who have a lot more bodyfat have the capacity to go into more extreme deficits without incurring these effects, as the amount of bodyfat you have to use as energy is higher. This is why things such as protein sparing modified fasts have been used with good success in the medical field for those who need to have gastric bypass surgery.

So although you may be able to diet for longer, harder if you have more bodyfat – you still shouldn’t do it forever.

And anyone who trains hard and has more muscle is more at risk of incurring a critical energy availablity, particularly if they do not increase calories in line with exercise expenditure.

Get in touch if you have any questions!